Who needs to end the stigma of mental health problems? 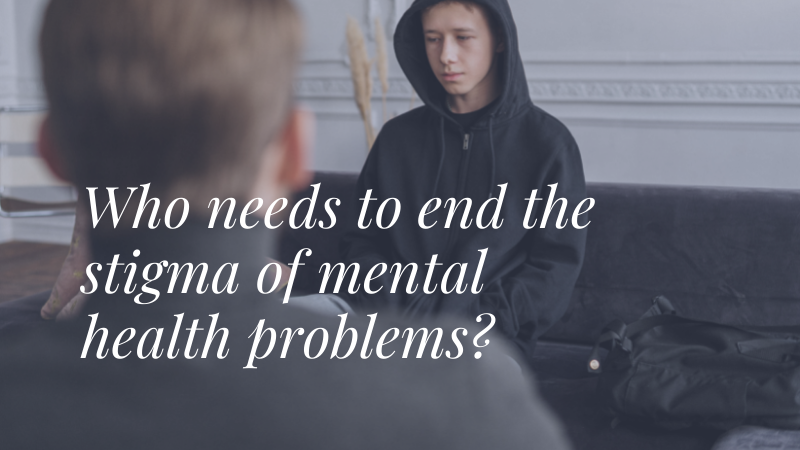 I don’t think the system is working well or it doesn’t have the patient’s best interest in mind. The waiting lists for public services are incredibly long, not everybody can afford private therapy, different mental health professionals do not co-operate with each other. There is a lack of communication between services, there is a lack of statutory regulations. Yes, there are accreditation bodies but is that really enough? I personally do not think so.

What is History telling us?

Talking about mental health stigma it is impossible to skip Irish history regarding the topic. In the 1800s and 1900s the time was terrific for people, over 20,000 people were instituted and being treated for mental health illnesses. The sheer number of people in the institutions meant that ill-treatment was rife, and their roots in the prison system meant that some patients were left chained up for months on end.

Within decades the asylums were too full, too big and grossly anti-therapeutic. What had started as a way to help people ended up damaging some of them.

The Dangerous Lunatic Act of 1838 also meant that someone could be committed to an asylum without medical opinion. It wasn’t necessary to have a medical certificate in order for magistrates to commit someone to an asylum. All that was needed was their opinion that someone was likely to commit an offense.

This led to families and communities beginning to use asylums in very specific ways, to remove mentally ill people or people with an intellectual disability or generally unwanted people from the family home.

However, we need to remember here that many of these families we are talking about, were poor, and were dealing with emigration and disease. Moreover, the State didn’t offer them any solution or support other than asylum.

We need to look at asylums as part of the much broader program of institutionalisation in Ireland, and that is including prisons, laundries and industrial schools. What happened with them has gone on to affect the psychiatric approach in Ireland today.

Psychiatry will do assessments and prescribe medicines. There is no therapy, there is no hearing the client and make him feel understood. Nothing about psychiatry is about feelings and emotions. Facts are more appealing to psychiatry. And I understand that, I believe that there is room for this in a mental health service. It is needed too, when dealing with severe mental health illness… but not to the extent it is now.

Whereas psychotherapy will provide a place where people can talk through their issues. People will talk about their own truth. Psychotherapy is all about feelings, emotions, experience and wellbeing. A psychotherapist will not prescribe any medicines but will actively listen to the patient. Again, there is room for this type of treatment too.

So, what it would be like if rather than competing with themselves those two services would start working together? There are lots of benefits to it. Firstly, the mental health profession would be more consistent, and stronger. People wouldn’t need to wonder who is who, and where to seek help. They would see that they are looked after in the best possible way. This is about gaining people’s trust. People need to see that they can trust mental health services. All of this is about society, this is about people.

Mental Health service is not a competition of who is better? This is not about mental health practician’s ego. This is about finding a healthy balance between the services for society’s benefit!

After some unpleasant experiences, I am keen to believe that people who are working in psychiatry have a totally different view on helping people and they have completely different values when it comes to people and their issues. (Not all of them, I am sure there are nice psychiatrists somewhere too).

However, this is very disturbing to think that people in a similar area of expertise are so against each other. The goal should be the same… to provide the best service possible to people who need help. If someone doesn’t like people, or doesn’t like to deal with people’s issues they should never work in mental health services.