How to spot toxic people in your life 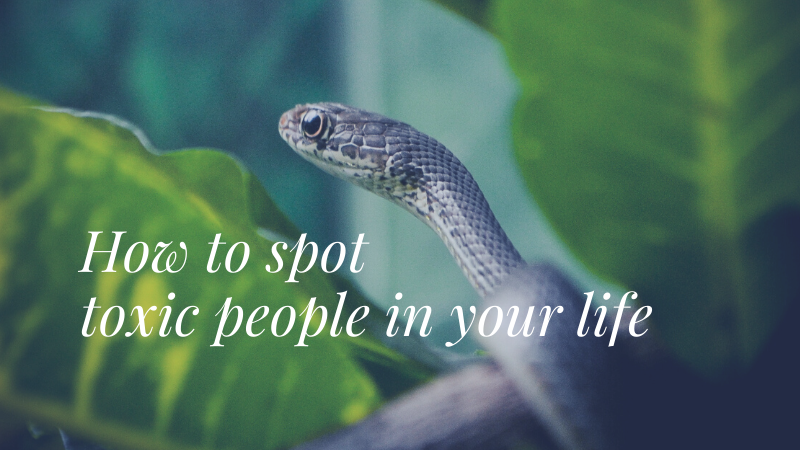 “Toxic people” we all know who they are. Most of us have at least once met toxic people. Who really affected us and made us question ourselves.  Dealing with toxic individuals, can be difficult and draining, to say the least. In fact, it may challenge what you know about yourself and push you to the limits.

Their damage lies in their tact and the way they can stimulate that classic response, ‘It’s not them, it’s me.’ They can have you questioning your ‘over-reactiveness’, your ‘oversensitivity’, your ‘tendency to misinterpret’. If you’re the one who’s continually hurt or the one who is constantly adjusting your own behavior to avoid being hurt, then chances are that it’s not you and it’s very much them!

Being able to spot their harmful behavior is the first step to minimizing their impact. You might not be able to change what they do, but you can change what you do with it, and any idea that toxic person in your life might have that they can get away with it.

There are plenty of things toxic people do to manipulate people and situations to their advantage. Knowing them will help you to avoid falling under the influence:

If you feel as though you’re the only one contributing to the relationship, you’re probably right. Toxic people have a way of sending out the vibe that you owe them something. They also have a way of taking from you or doing something that hurts you, then maintaining they were doing it all for you.

They’ll make you prove yourself to them.

They’ll regularly put you in a position where you have to choose between them and something else – and you’ll always feel obliged to choose them. Toxic people will wait until you have a commitment, then they’ll unfold the drama.

We all get it wrong sometimes but toxic people will make sure you know it. They’ll judge you and take a swipe at your self-esteem suggesting that you’re less than because you made a mistake. We’re all allowed to get it wrong now and then, but unless we’ve done something that affects them nobody has the right to stand in judgment.

They’ll keep you guessing about which version of them you’re getting.

They’ll be completely lovely one day and the next you’ll be wondering what you’ve done to upset them. But there isn’t anything obvious that will explain the change of attitude – you just know something isn’t right.

They won’t own their feelings.

Rather than owning their own feelings, they’ll act as though the feelings are yours. It’s called projection, as in projecting their feelings and thoughts onto you.

Toxic people will lie before they ever apologize, so there’s no point arguing. They will twist the story, change the way it happened and retell it so convincingly that they’ll believe their own nonsense.

They’ll use non-toxic words with a toxic tone.

The message might be seen as innocent enough but the tone conveys so much more. Something like, ‘What did you do today?’ can mean different things depending on the way it’s said. It could mean anything from ‘So I bet you did nothing – as usual’.

When you’re trying to resolve something important to you, toxic people will bring in irrelevant detail from five arguments ago.

You might be trying to resolve an issue or get clarification and before you know it, the conversation/ or argument has moved away from the issue that was important to you and on to the manner in which you talked about it. Completely dismissing your point.

They’ll be there in a crisis but they’ll never ever share your joy.

They’ll find reasons your good news isn’t great news. The classics: About a promotion – ‘The money isn’t that great for the amount of work you’ll be doing.’

‘You always …’; ‘You never …’ It’s hard to defend yourself against this form of manipulation. Toxic people have a way of drawing on the one time you didn’t or the one time you did as evidence of your shortcomings. Don’t buy into the argument. You won’t win. And you don’t need to.

The impact on you

Toxic people often make you want to fix them and their problems. They want you to feel sorry for them, and responsible for what happens to them. Yet their problems are never really solved, for once you’ve helped them with one crisis, there’s inevitably another one. What they really want is your ongoing sympathy and support, and they will create one drama after another in order to get it. “Fixing” and “saving” them never works, especially since you probably care more about what happens to them than they do.

Toxic people are draining; encounters leave you emotionally wiped out. Time with them is about taking care of their business, which will leave you feeling frustrated and unfulfilled, if not angry. Don’t allow yourself to become depleted as a result of giving and giving and getting nothing in return. At first, you may feel for them and their plight but once you observe that every interaction is negatively charged you may want to limit your contact with them, or maybe even cut ties. Your time and energy are essential for your own life. Don’t be overly willing to give them away.

And beware especially the narcissistic toxic person. Their modus operandi includes gaining total control of a situation, and that means of you, too. They will demand your undivided attention and attempt to convince you that you need to join their camp. To their way of thinking they know better than you. They’re right; you’re wrong. And you need to do what they say. This kind of toxic person will think nothing of invading your space and may try to isolate you from others you are close to.