How to become a truly free person? 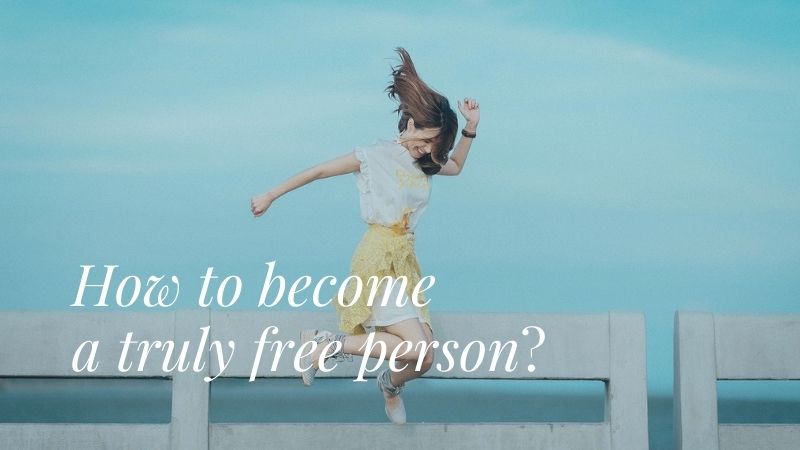 For to be free is not merely to cast off one’s chains, but to live in a way that respects and enhances the freedom of others. – Nelson Mandela

The dictionary says freedom means, “the power or right to act, speak, or think as one wants without hindrance or restraint”.

As well as “absence of subjection to foreign domination or despotic government” and “the state of not being imprisoned or enslaved”.

To be truly free is to be aware of having choices and the possibility of being free to act on those choices in a way that would serve ourselves and our community best.

By working on building your self-worth, to be able to say, “I am enough”, will give you the new perspective you need on the road to being psychologically free.

Physical Freedom is literally to be free of action, to move about, to speak, to do things, to work, to act on the physical world without hindrance or physical restraint. Being physically free in life is to be free to take action or not, what we’d like to say or not, what we’ll put into our bodies or not, etc.

Mental freedom is the ability to choose to detach from external labels. To make choices for oneself – even the ability to choose our thoughts and beliefs through gathering information from all sides of a discussion. We all get stuck with negative thoughts that might have occurred to us during tough situations.

We could choose to hold onto those negative thoughts, which will turn them into beliefs if thought long enough. It then becomes a state of mind and eventually part of our personality over time. We’re now slaves to rigid thinking or not mentally free.

Self-regulation lies at the heart of psychological freedom and allows us to separate our wants from our needs. It lets us consider our initial reactions to what others are saying, writing, or doing without immediately reacting in anger. It lets us have empathy for others and be open to learning something new. And it lets us overcome our fears of creating and sharing.

Still, as humans, we have a need for meaning that has us searching for purpose and recognition in ways that can all too easily result in us being psychologically unfree. Existential angst can express itself in many different forms, ranging from an inability to do anything to a manic desire to do everything.

Humanistic psychology is based on an approach that embraces freedom of choice, creativity and self-awareness. It was primarily a recent influence by the work of psychologists Carl Rogers and Abraham Maslow (you may recognize Maslow as the formulator of the ‘hierarchy of needs’ theory, which I have explained the whole concept of it in my first book “Grow into your happiness”).

They believed there was a need for a positive, uplifting view that focused on human potential rather than human ‘dysfunction’ (Freud’s speciality). So, the new humanistic psychological view is based on the power you have over your own fate, rather than the ways in which your unconscious memories (Freud) or conditioning (behavioural psychology) influence your behaviour.

Even if your brain is conditioned and your unconscious memories have affected your behaviour, humanistic psychology says you are free to choose something different now.

Once you realize this, your brain creates new neural pathways which would open one up to see new possibilities in their life. With a natural drive to achieve personal growth and self-development, one is free to develop a more complex and evolved version of themselves and their life.

what does it mean to be free?

Real freedom can be defined as the exertion of the power each human has to consciously and independently choose from a constrained bundle of possibilities at his disposal. You might not be free from financial constraints or illness but you are free to do something about it. Freedom lies not in the capacity to say yes to everything but to say yes only to that which really matters to you and that you decided it’s good for you and everyone else. It lies in saying no to that which will not bring you to the few yeses you actually want in your life.

What we get when we turn pro is we find our power. We find our will and our voice, and we find our self-respect. We become who we always were but had, until then, been afraid to embrace and to live out.