How do Core Beliefs control your life? 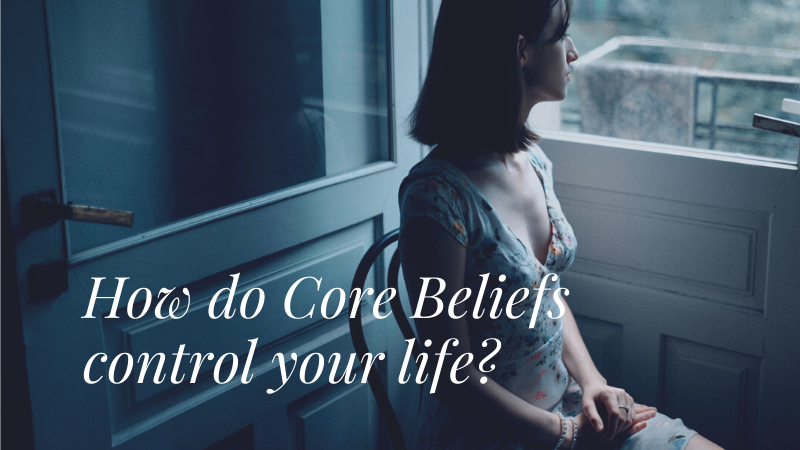 You’ve probably got used to questioning your thinking in different situations. You know how to identify the thoughts that are causing you distress and how to challenge them and replace them with more balanced thoughts. However, you might notice that there are times when it is harder to believe the new balanced thought and the old unhelpful thoughts seem to be immensely powerful. You may have noticed that this happens in certain situations.

A possible explanation for this ‘difficulty in letting go’ of an unhelpful thought is that there may be a strong core belief at the root of that unhelpful thought. Core Beliefs are the very essence of how we see ourselves, other people, the world, and the future. Sometimes, these core beliefs become ‘activated’ in certain situations. Let me give you an example:

Core beliefs, such as the one from the above example, develop over time, usually from childhood and through the experience of significant life events or particular life circumstances. Core beliefs are strongly-held, rigid, and inflexible beliefs that are maintained by the tendency to focus on information that the belief and ignoring evidence that contradicts it. For example, Ann focuses on any feedback/ behavior from men that are not positive and then use this to confirm that yet again she is unlovable. Even neutral statements from any men are often interpreted as negative. Over the years, this narrow focus gives strength to the belief and Ann no longer thinks to question it. It is just totally and absolutely accepted. It is not surprising, then, these types of beliefs are the hardest to shake.

HOW DO CORE BELIEFS DEVELOP?

Beliefs are nothing but thoughts that we affirm to ourselves over and over and which we take to be true. A belief can consist of a very simple thought such as “Life is hard”, or it can be a complex array of thoughts and statements such as in a belief system. Whether you are aware of it or not you are always affirming what you believe.

In fact, if you really listen to yourself you are continually making a case for the ‘rightness” of your beliefs even when those beliefs are detrimental to your happiness and well-being! Your “inner lawyer” is continually justifying and being “right” while making other beliefs “wrong”. The way to keep a belief system going is to continually affirm it and justify it and never question it.

We have developed core beliefs in every area of our life and these beliefs impact our happiness, success, and personal fulfillment. Moreover, we form core beliefs as a way to understand and live in the world around us.

Beliefs are nothing more than thoughts that over time we come to believe as true. However, they are often developed based on our early experiences, which for many people don’t reflect what is actually “true”. Because they feel so real and so true, they can be very strong forces in shaping our perceptions and difficult to change.

Another example might show up in your career or in relationships. Let’s say you are working towards a career dream that you have. However, you notice that as you take steps towards your career goal,  you find yourself sabotaging your success, procrastinating, feeling anxious, and avoiding what you need to do.

You might wonder “What’s wrong with me! Why do I keep stalling? I want this goal!!” What you might not realize, is that you are carrying a deep belief that you don’t deserve success, others will find out that you’re a fraud, or that achieving success will involve having to maintain more than you can handle.

Again, these aren’t thoughts we are aware of on a daily basis. What you might notice instead while working on your dream career is, “I need to take a break,” “Maybe I should update my resume again.”  You’re not thinking, “I’m not worthy, I can’t have what I want”, though this could be the core belief running the show.

Uncovering your core beliefs helps you to take charge of your life. To recognize the unconscious forces that drive your thoughts and behavior, which ultimately empowers you to do something different. To change your beliefs, and ultimately change your life.

The good news about core beliefs is that, with work and commitment, they are indeed changeable.

Cognitive-behavioral therapy is one of the best therapies for working on your core beliefs. It focuses on looking at how your beliefs and thoughts affect your behavior and moods, and how you can change these cycles for good.